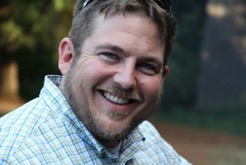 Rev. Erik Samuelson grew up in Everett, WA where he graduated from Cascade High School.  He then worked his way down the west coast, first at Pacific Lutheran University in Tacoma where he studied Classics and Religion (and bartending) and met his wife Tauni, a pediatric nurse. Erik and Tauni then moved to Berkeley, CA where Erik earned a Masters of Divinity at Pacific Lutheran Theological Seminary and a Masters of Arts in Systematic and Philosophical Theology (with an emphasis on the theology of the Lutheran Confessions) from the Graduate Theological Union. Erik was ordained a pastor in the Evangelical Lutheran Church in America in 2006. Erik served as pastor/mission developer at redevelopment congregation in Spokane, WA, before coming back to his hometown in 2011 to serve as Campus Pastor and Director of Vocational and Spiritual Formation at Trinity Lutheran College. Erik and Tauni have two children.

Erik has had an interest in experiential worship and faith development since his days at PLU, where he was part of a campus ministry team that began what would now be called an emergent worship experiment called Common Ground.  He served on the planning team for three ELCA Youth Gatherings, working with the creative team that puts on the “big events” in the dome, including worship.  (Ask him sometime about how one organizes communion for 40,000 people.)  Erik is approved as an ELCA mission developer, was a voting member at the 2009 ELCA Churchwide Assembly, was elected to the Evangelical Outreach and Congregational Mission Program Committee of the ELCA in 2009. He has done extensive work and consulting with The Forum for Theological Education in the areas of vocational discernment and formation, and is active in many conversations and teams around new and emerging forms of theological education, including chairing the credentialing working group for the “Reimagining Theological Education” project of the Convergence Network.

Faith-based community organizing methods have informed his ministry from the very beginning, and he has been teaching community organizing to his students, as he did his congregation in Spokane.  Erik is a member of the ELCA’s “Organizing for Mission Cohort,” a network of young ELCA pastors using the methods of community organizing for new and renewed mission in the world. and has been involved in leading and training with the cohort, and through that work in several congregational and Synodical contexts. Erik has a passion to help translate the Gospel of Jesus as understood in the Lutheran tradition to people who have not been encountered by it—particularly people aged 18-40—and to participate in authentic relational communities that are seeking to concretely embody the Way of Jesus in a life lived together in the world. He also loves to talk about Jesus in coffee shops and pubs.

Erik’s prayer and worship life is shaped and nourished in major ways by the Acts of the Apostles, the Taizé Community, the writings of Martin Luther and Dietrich Bonhoeffer, and the liturgy and theology of the Lutheran Church.  Erik sees the Lutheran Church as poised to make a significant difference in the emerging reformation of the Christian Church—a reformation perhaps as significant as the one in the 16th Century.  He takes seriously the call of God in Baptism, believes that each and every person is called by God for significant work and service in the world, and loves to help people connect deeply to their vocations. Erik describes his call to ministry in this way: “I am called to encourage and challenge the Church to live more fully into God’s dream by innovating in and among communities who are engaging the resources of the Christian faith to include and empower young adults.”

Erik’s CV can be found at http://www.eriksamuelson.com/cv